Director Bill Rhoten can also be contacted at: DirectorBillRhoten@gmail.com (214) 552-9896

Mojave is a full length play and unique theatrical piece that represents a slice of the Old West, based on real characters in the 1800s. The main character is Olive Oatman, the first tattooed white woman in America , who was kidnapped by the Yavapai Indians in 1851 after the massacre of her family, and then later was sold to the Mojave Indians with whom she lived for nearly five years.

The story unfolds during a two-week period, that she was secured at Fort Yuma after being ransomed from the Mojave. While awaiting the reunion with her brother, Lorenzo, whom she had no idea was still alive, we experience the fears of her tormented past, the insecurity of the future, and the overcoming of both.

As the play opens, preparations are being made for Olive’s arrival by Sarah Bowman, another famous female historical character of the Old West, who has been put in charge of attending her, due to the lieutenant’s wife’s refusal to do so. After Olive’s arrival at the fort, Sarah soon realizes the extent to which Olive must adjust in the coming weeks, to be ready to re-enter “white society”. Olive, who is struggling to remember the language, is accompanied by her Mojave sister, Topeka, from whom she is reluctantly being forced to separate. Olive’s fears and insecurities are played out in her nightmares as well as her struggle to cope with her loss of her second family, the Mojave, who, although she was “captive” she had grown see as her “rescuers.”

Unexpected visitors, local trappers, who have heard all the “hubbub” about the visiting “squaw”……. “she may be white but that is the mark of the Mojave,” they inform Sarah, upon seeing Olive’s blue chin tattoo. Sarah takes no guff from the trappers informing them that they can’t spend the night in the cabin, their usual place to bed down when in the vicinity. This turns out to be a major conflict during

her stay at the fort leading to a potential kidnapping and foundation for the high tension and contrasted comic relief of the play. “They ain’t too bright.” are remarks made about these visitors.

Upon the arrival of Lorenzo, Olive’s brother, who was presumed dead, we see a touching reunion and his rendition of the massacre and how he survived. The two are honored by their hosts at fort Yuma and sent off to join the wagon train to California and their new-found placed in history.

CURLEY JOE (laughing)
Why Hank, I do believe she’s sweet-talkin’ you.

HANK
I told you, Curley Joe. Even when she was cheatin’ me outta all that money, she was starin’ at me with that big ol’ smile. She couldn’t take her eyes off me.

LILLY
That’s right, Hank. I was mesmerized by how stupid you were.

HANK
You just shut up and give me my money back.

SARAH BOWMAN
How much did he lose, Lilly?

HANK
It was twenty-seven dollars and fifty cents, and I want every penny of it back.

SARAH
Give it to him, Lilly.

(LILLY opens the money box and starts counting out some bills.)

CURLEY JOE
While you’re at it, why don’t you just give us all that money?

(LILLY stops counting the money and everyone freezes for a moment.) 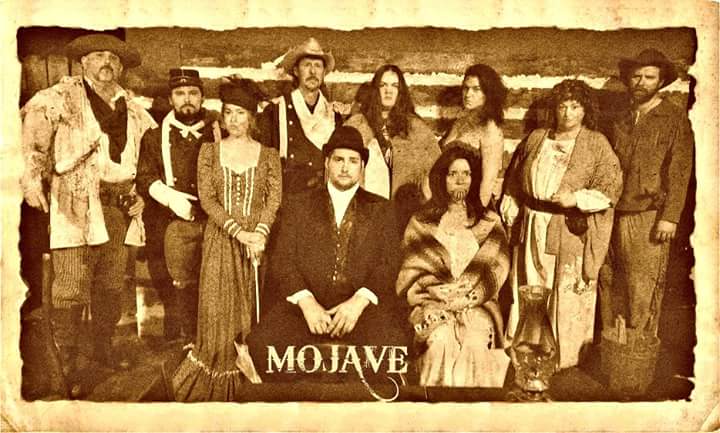